I’m on the fence about the new U.S. away jersey.  At first glance last Wednesday against Italy I was iffy about the white sleeves because it made the sleeves look like cut-offs.  But I’m starting to come around.

The new design retains the retro diagonal stripe, though it is now black.  I’m not a fan of the new penchant to include black in the red, white, and blue mix (like the all-black U.S. Women’s uniforms).  Like many U.S. fans, I’d like to see the red third shirt become a mainstay.  Nevertheless, the new away look is slowly growing on me, and of course it doesn’t hurt that it is now associated with that historic 1-0 defeat of Italy!

FC Dallas also unveiled their new home and away jerseys on Thursday.  I think the home shirts are a classy, subtle improvement on the now familiar horizontal red/white stripes. 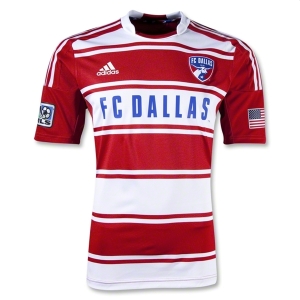 I also really like the return of some gray in the blue/white away shirt. 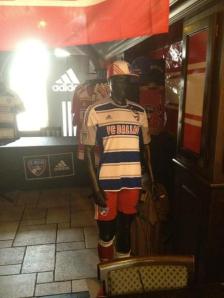 A lot of fans would like to see FCD join the ranks of teams with sponsored jerseys.  I would be fine with it as long as the sponsor’s logo doesn’t radically clash with team colors (i.e. Philadelphia’s Bimbo shirt), but in the meantime I like FCD’s uncluttered jerseys.

It would be fun to see FC Dallas throw a third jersey into the mix, perhaps a departure from the usual “hoops”.  Other MLS teams are starting to experiment with third jerseys (I think the Timbers’ third shirt for this season is pretty cool).

The unveiling of new jerseys means the new MLS season is just around the corner!  FC Dallas kicks off (at home) against NY Red Bulls next Sunday, March 11 on NBC Sports Network.

What do you think about the new U.S. and FC Dallas jerseys?