Saturday evening Chelsea looked like a team that was withering after two weeks in the American summer heat.  You can hardly blame them since the past two weeks have been packed with travel, two-a-day training sessions, loads of publicity appearances, and of course four heavily hyped friendlies.

After starting the U.S. tour with that promising 4-2 defeat of Seattle Sounders, things have gone downhill a bit, with a draw against Paris St. Germain, followed by losses to the MLS All-Stars and A.C. Milan last night.  Yes, it’s only preseason.  Obviously the important thing on these tours is team preparedness and bonding – getting as ready as possible before the games really count.  The tour has certainly been successful from a marketing standpoint with each of the stadiums mostly full and Chelsea fans turning up in droves for every match.  Still, ending the tour with consecutive losses must have at least a small negative psychological effect.  You like to see those engines fully revved in preseason, but there’s still time to get ready.

Considering all that the Blues have been through on this tour, it’s hard to be too disappointed or critical about losing to A.C. Milan.  It’s not like Milan dominated or anything, in fact, Chelsea controlled large portions of the match.  But if there was one minor alarm that went off for me last night, it’s that Chelsea’s play was eerily similar to the way they played much of the first half of last season.  That is, controlling most of their matches without actually scoring.  Possession without points.  Chelsea has a very strong midfield, but they’ve got to produce more goals this season.

Fortunately, the team has a few more weeks to work out the kinks.  The biggest readiness test will be that August 12 Community Shield match against Manchester City.

I want to thank everyone for stopping by the blog during the past two weeks.  You’ve brought record readership to the site during Chelsea’s American tour.  I sincerely appreciate your clicks and I hope you will swing by again often during this season!

Your thoughts on Chelsea’s performance against A.C. Milan? 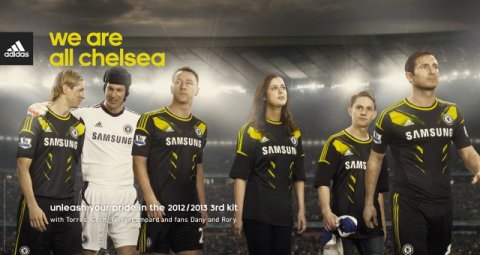 Chelsea trained in Miami for the first time yesterday evening in preparation for their final U.S. preseason game against A.C. Milan Saturday night.  The Blues will undoubtedly be antsy for a win after tying Paris St. Germain in New York and losing to the MLS All-Stars in Philadelphia.  Should be a fun one against A.C. Milan.

Yesterday Chelsea unveiled the all-important (not really) “third” kit – an interesting yellow and black number inspired either by Tron or 80s big-hair metal band Stryper.  I’m not sure which…

I’m not a big fan of this 3rd kit, though there are far worse jerseys to be featured in the Premier League this season (for proof check out this and especially this).  Chelsea has also had worse 3rd kits in the past, although I liked last season’s 3rd (which has sentimental value as the kit worn in that historic win at Barcelona to reach the Champions League final).  Generally, I prefer jerseys that aren’t too busy, and this new kit has a little too much going on for my taste (particularly those ab-highlighting lines).  But the 3rd is usually just a cameo jersey, so we probably won’t see it very often.

As a side note, Chelsea wore their new away kit for the first time against the MLS All-Stars the other night and I thought it worked well.  The previously bashed sash on the jersey didn’t bother me that much.

Some Blues-related news I’ve seen today includes Benayoun possibly being loaned to Fulham, and Marseille possibly selling defender Cesar Azpilicueta to Chelsea.  I like Benayoun, but at 32-years-old, I don’t expect Chelsea will keep him this season.  Fulham would probably be a good gig for Benayoun.  As for Azpilicueta, I don’t remember much about him from watching Marseille in the Champions League last season, but I welcome the signing of another defender.

What do you think of Chelsea’s new 3rd kit?