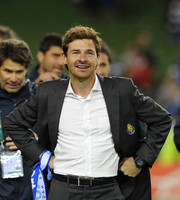 My initial reaction to the recent rumors and subsequent hiring of Andre Villas-Boas as the new Chelsea manager was surprise, followed quickly by this could be good.  Surprise, because after weeks of Guus Hiddink the Sequel rumors, I was pretty much resigned to Hiddink landing the job – not in too much of a negative sense mind you, it just wasn’t all that exciting a choice.  Hiddink would be a safe, solid pick, with loads of experience and previous Chelsea rapport to build on, he just doesn’t seem like a candidate who would be in for the long haul.

Villas-Boas on the other hand could be the perfect man for the long haul.  He’s young (33) and energetic.  He aspires to coach in the EPL.  He’s already worked at Chelsea for a spell during the Mourinho years.  Any hesitance is simply due to his limited track record.  Porto’s last season was undeniably fantastic, and Villas-Boas has been tutored by some renowned managers, but it does give me pause considering most Chelsea starters have been playing three, four, or five times as long as he’s been a manager (I haven’t done the math, but it’s a lot).

It also gives me pause when you read comments about what great friends he is with his players.  Really?  Do managers need to be best buds with their team?  Certainly, at this level, you want to have good manager-player rapport, but I don’t like the idea of the manager being a peer, texting buddy, BFF with the team.  Call me old school, but I prefer a manager at least a few years older than his players because of the perspective and wisdom it can afford him.

After those last two paragraphs I almost talked myself out of Villas-Boas enthusiasm.  Plus, “Villas-Boas” doesn’t really roll off the tongue (or keyboard).  I wonder if we can call him “VB” for short?  Or maybe just Andre.  He is a risky choice, but I like the idea overall.  It’s not as if he has to build the club from the ground up.  He has a lot to work with.  If he works out, he could be just the kind of long-term manager Chelsea could build their future around.  Hopefully they’ll demonstrate more patience with Andre  than they did with Carlo!

Posted on June 23, 2011, in Uncategorized. Bookmark the permalink. Leave a comment.